Back to all posts

Hello everyone, well we are here for the big one. In this tutorial about Omnisphere we are finally going to look at ---drum roll please--- Granular Synthesis. Yes, Omnisphere has the proverbial kitchen sink in ways to mangle and shape your sound.

First of all what is granular synthesis? In its most basic form it is exactly the same as a sample playback engine except that the sound is broken up into 1 to 50ms snippets. This is where we get granular from as you have broken your sound from one long section into many minuet snippets. If you slow the playback down you get a kind of soundscape, when sped up it is heard as a note or sometimes notes depending on the sample used. The fun thing is neither method will recreate the exact sound you have imported.

Granular synthesis was first invented by the Greek/French musician Iannis Xenakis in around 1960 but it was the Canadian musician Barry Truax who used real-time versions in recordings. So there we have a little background of what it is and where it came from. By now you may start to have a grain (no pun intended) of a thought what we can do with this type of synthesis and what sounds it would be best suited for.

Getting Down to Business

First we need to create a quick sound using a sample with a filter and this time we will increase the attack to give it a bit of a pad feel to it. I've used a sample here as it is easier to depict what is happening with the sound when twiddling the parameters. Quickly flipping over to the Granular page we are presented with several knobs along the bottom and a picture of the waveform taking up the centre of the screen. 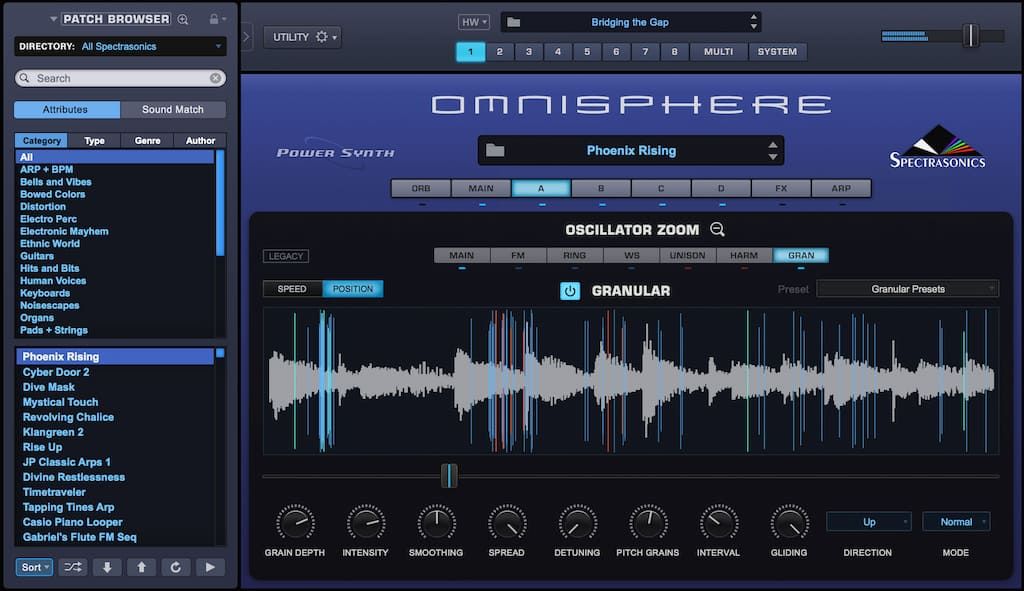 When I switch this on you will immediately hear the difference in tone and timbre. This is because the sound is now being broken up into little grains. The centre display shows how these grains are being manipulated by the parameters running along the bottom.

We have two distinct modes in Granular, Speed and Position. Speed automatically moves the position of the sample that is being granulated forwards or backwards at a fixed rate. This is controlled by the slider along the bottom of the waveform. When we change this to position the slider allows us to select which portion of the sample is being granulated. This gives us control of what stage or part of the sample we want to effect. You may want to only affect the attack or decay portion. Position also allows us to apply a freezing effect. If you watch the centre display the blue lines signal what part of the sample is being affected.

You may have noticed in the top left corner there is a button for legacy. This enables the original granular engine that was in Omnisphere 1 where the grains were a larger and provided a more dreamy result as the grains were slower-moving.

The number of Zones there are in a Soundsource determines the maximum range of the position slider and can vary from just 1 second all the way up to 90 seconds.

Let's start to really mangle our sound. With Grain Depth we can increase the number of grains our sound is broken into. The further right the knob goes the more grains we get but also the higher CPU demand. You can get really good results using only a little of this.

Smoothing softens the transition as jumping from grain to grain can sound abrupt with certain soundsources. For those used to audio editing, think of smoothing as cross-fading your grains.

There is one hidden parameter and we have to go to the mod matrix to use it. Sample Granular Trigger allows for single grains to triggered at specific time intervals without affecting their size. If we set an LFO to square and play a note, it affects a single grain every time the LFO goes above zero. You can use other sources to get some really interesting effects.

Direction does what it says on the tin and determines the direction of the transposed grain with Mode adjusting how dramatic the detuning happens. Wild can give you.....well, quite wild results. One quick note, if you are in legacy mode, wild does not have any function.

One cool thing is you can drag and drop samples into the centre display including full songs. This gives you endless material to make other patches from.

If you enjoyed this blog post please head on over to my YouTube channel, give the video a thumbs up and subscribe to the channel. I would be grateful if you could show your support by heading over to the store and picking up a track or two